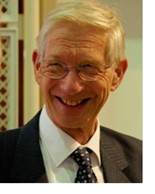 Peter was head of the University of Cambridge’s School of the Physical Sciences, where his research was on the physics of quarks, until retirement in 2004. He played a leading role in the creation of a number of new projects in the University, among them the Newton Institute, the Millennium Mathematics Project, the Cambridge Computational Biology Institute, and the construction of the buildings for the Centre for Mathematical Sciences.

Since his retirement Peter has been working with the Department for Transport and county councils in the East of England to improve the use of information in the operation of the road system. He has become involved with a number of other organisations and initiatives that are trying to have a positive influence on the way the region is developing. He is a trustee of Cambridge Past, Present & Future and a member of its Heritage Working Group, chairs the East of England Civic Societies, and has previously been chair of the regional RSA (the Royal Society for the Encouragement of Arts, Manufactures and Commerce). He was joint leader of the 2030 Vision for the Cambridge Sub-region, an initiative which sparked the need for an organisation such as Cambridge Ahead, and is an active participant in the Centre for Science and Policy’s Fellows Network. He is a Fellow of Christ’s College and has served as its Vice-Master.