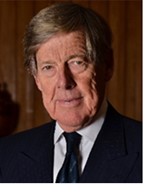 Lord Alec Broers FREng HonFMedSci FRS is an Honorary Vice Chairman of Cambridge Ahead. He played a significant role in the University of Cambridge’s rise as a major economic force and centre of excellence for high technology and was vice-chancellor between 1996 and 2003. He has served on numerous national and international committees, including the Engineering and Physical Sciences Research Council, the Foresight Panel on Information Technology and the NATO Special Panel on Nanoscience and was a member of the government’s Council for Science and Technology. He was elected to the Royal Society in 1986, to the Academy in 1985 and became a Foreign Member of the US National Academy of Engineering in 1994.

He is on the Board of Directors of Vodafone and of RJ Mears LLC. In March 2004 he joined the Board of Plastic Logic as Non-executive Chairman and in December of the same year became Chairman of the House of Lords Science and Technology Committee. In 2004, he was made a life Peer in recognition of his contribution to engineering and higher education.