The pandemic has had a huge impact on public transport in particular, while car usage has rebounded. The Government is ontrack to ban sales of new petrol and diesel vehicles by 2030, but willelectric vehicles improve our quality of life?

A move from petrol and diesel to electric vehicles (EVs) is something we should make as soon as possible. It would reduce car tail pipe emissions and improve air quality. Last mile deliveries should be net zero, using a combination of cargo bikes and EV light goods vehicles, for example.

But EVs are not a panacea, and we need to be clear that people may not use them in the same way as they use their current cars. The cost of driving an EV charged at home may be lower than that of driving a a petrol or diesel vehicle. This may be great in terms of cost savings, but we know from our research that lower prices for travel encourages us to make more journeys. 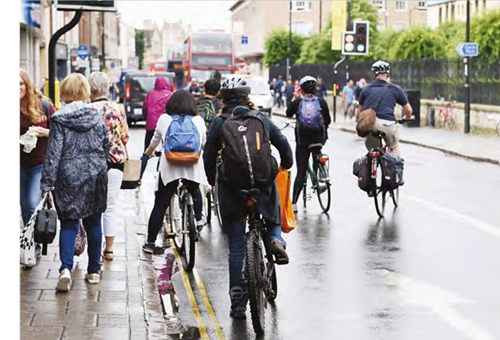 Further, EV users may feel less guilty about driving - it’s a bit like moving to low-fat yoghurt to lose weight and then feeling free to eat lots of it. If people think EV journeys are green, they may choose to drive instead of cycling or walking, further increasing congestion. Busy roads discourage people from walking and cycling, when we should be encouraging that kind of ‘active transport’.

While electric vehicles can reduce greenhouse gasses, they still release dangerous particulates from the wearing down of brakes, tyres and road surfaces. They tend to be heavier too, with implications for traffic accidents. So, although they’re undoubtedly a key part of the decarbonization solution, replacing petrol and diesel vehicles with EVs is unlikely to solve our congestion problem in Cambridge.

What’s needed is a radical shift not only in how we move around, but when and why. It’s time to rethink how we design cities, asking ourselves what we want our cities to feel like in the future, and what is the role of transport to support this system.

Within a city, a broader mix of local services would reduce the need to travel – the 15-minute city concept is very interesting in this regard. And while it’s not practical to dig up existing roads, we can restructure how we use existing resources. We can create more mixed land use, rethinking where we sleep, eat, shop, work and socialise. Barcelona, Amsterdam and now Paris have been leading the way in becoming polycentric cites with thriving local neighbourhoods. The planners in Nordhavn in Copenhagen are pushing these ideas even further aiming for neighbourhoods where key services are reachable to all in just five minutes. This doesn’t just apply to the city centre – if we had better services in villages people wouldn’t be forced to travel into the city or market towns as frequently either.

We also need to be willing to experiment. When Bristol’s leaders decided to trial pedestrianised streets, businesses were worried it would reduce footfall. But against expectations, these streets increased social interaction and people and businesses began to prefer them. I think what this shows is the importance of piloting ideas to test assumptions in the real world.

Public transport plays a vital role, and one principle we should adopt is to make it cheaper than car travel. Now volumes are lower and patterns less predictable, the financial model is under further stress. Perhaps we need to start to see it as service, subsidised for community benefit rather than profit?

We should also think about the role data and technology can play in making public transport more attractive. There’s an opportunity to think of mobility as a service and make it more demand led and user centric. For example, a single payment could allow a passenger to hop on and off buses, e-scooters and bikes seamlessly to get around. Helsinki and Vienna have progress in this respect. Public transport needs to be more pleasant and convenient to entice people away from the car and for those who don’t have access to a car.

It’s highly controversial, but we have to acknowledge though that the most effective way of getting people out of their cars is some form of road-user charging, something the Greater Cambridge Partnership has been consulting on. This isn’t always a popular option, but the evidence – from London and Stockholm for example – shows it works.

In Stockholm the city piloted charging, noted the traffic decline, then stopped the pilot, and saw the traffic return. A little like turning a tap on and off. Public support for the scheme fell as the introduction approached, but once the charges were introduced support increased again. People are often negative about proposed changes, but experience can transform views.

Careful consideration needs to be given to avoid road-user charging disproportionately affecting the least well off and therefore increasing inequality. It would need to be matched with a good public transport system. In Cambridge, people priced out of the city could be doubly penalised and I know that our local leaders are alert to this potential issue.

Experiments would be worthwhile and they can be simple things. Park and rides could be places to get coffee, collect high street shopping and Amazon parcels, get your dry cleaning done – somewhere to do your everyday jobs. When I was a mother of young children, I really valued beingable to exchange my bike for a push chair for a few hours in the city centre, making cycling viable. Someone had recognised the precise practicalchallenge and provided a simple solution, and we need more of that thinking.